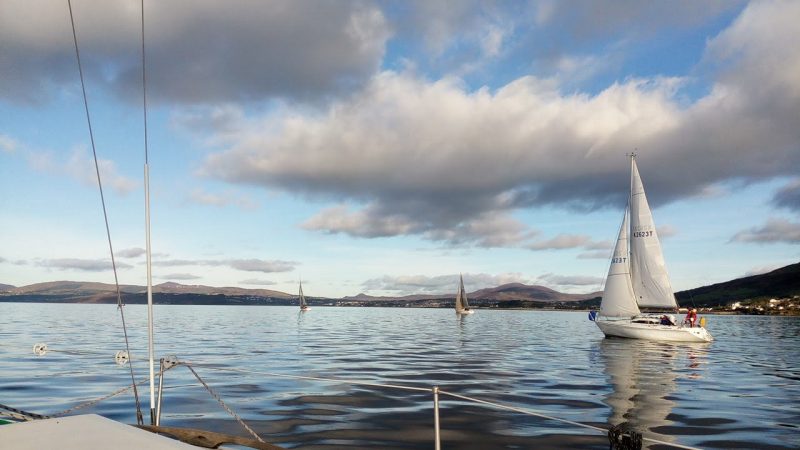 Our membership consists of IRC and other racing and cruising sailors as well as powerboat enthusiasts and some keen dinghy sailors. All club members enjoy spending time pottering about on the lough and many like to venture further afield; either to cruise or to represent the club in competition.

Lough Swilly Yacht Club was founded in February, 1955, when a meeting took place in the old City Hotel, with a view to forming a “club” to encourage sailing and power boating in Lough Swilly by every possible means.

The first Officers of the club were:-

A Committee was set up of men who between them had a wealth of sailing experience and whose enthusiasm and sheer hard work laid the firm foundation of today’s thriving club.

The club was fortunate to have as a founder member Mr. James Whyte, Manager of the Lough Swilly Railway Co. and when the railway line from Derry to Buncrana closed in 1953 the club was able to purchase for a very nominal sum the old station waiting room and ticket office, as well as a considerable amount of ground where the old railway line ran beside the water’s edge. This formed the nucleus of the present club and in subsequent years the slipway was built and extended, the caravan site erected and the clubhouse itself took in the old station house.

The first racing took place at 3.30p.m. (Swilly time) on Opening Day, Saturday 2nd. July 1955 and there was a fine turnout of miscellaneous craft. After the day’s racing all members and friends were invited to afternoon tea at the temporary club premises on the Railway Station Platform in Fahan, during which prizes were awarded.

Fahan is a quiet village nestling along the shores of Lough Swilly in the shelter of the rugged mountains of Inishowen. It is built on an ancient monastic settlement.

Approaching the village from Derry one passes, on the right-hand side, the old walled graveyard with its eighth century cross-slab of St. Mura and the ruins of a later church. About 200M along the road, on the left-hand side close to the shore, is St. Mura’s Holy Well.

Looking down the Lough it is not difficult to visualise the tenth century Viking ships sailing up the Swilly to raid and plunder the treasures of the monastery.

A few centuries later from the Rathmullan area across the Lough, the Flight of the Earls took place. The Gaelic chieftains, O`Neil and O`Donnell, set sail for Spain after the disastrous Battle of Kinsale in 1601, never to return.

In the Autumn of 1798 a small French fleet under Admiral Bompart was intercepted off Tory Island by a larger British force. Following a running battle in heavy seas the French frigate La Hoche was forced to surrender and was escorted into the Swilly by HMS Doris. On board was Theobald Wolf Tone, the leader of the United Irishmen who was arrested and brought from Buncrana to Derry jail. He was subsequently hanged for treason in Dublin.

During the first World War the Laurentic was sank by a torpedo at the mouth of the Swilly. There is a memorial in the Church of Ireland graveyard to those who drowned.

In the Church you will find the beautiful stained-glass window by the Irish artist Evie Home. It depicts the story of St. Elizabeth of Hungery.

Cecil Francis Alexander, the well-known hymm writer lived in the Old Rectory for some years.

Here, in 1908 Joseph Cordner, an engineer, assembled his prototype airplane on Lisfannon strand. He took off and flew over the shallow waters of the Lough; there is no record of the length of time the plane was airborne. It was the first powered flight in Ireland.

The Columban monastery in Derry established a settlement here in the sixth century. Its Abbott, Mura, a member of the powerful Cineal Eoghain, made it a seat of learning and culture. About the middle of the thirteenth century the abbey was destroyed or abandoned. Another abbey was built but it, too, was destroyed in the sixteenth century, possibly as a result of tribal wars. During the Plantations the abbey lands were given to the Queen’s Bishop of Derry. In 1622 the ruins were `well and sufficiently repaired`and the Church continued in use until 1820 when it was replaced by the present Church of Ireland across the road. The window in the existing ruin is probably seventeenth century, the blocked up rectangular window in the wall is considered to be of an earlier date. Some relics survive: the crozier, or Bacall-Mura, is now in the National Museum, Dublin, the exquisitely crafted bell-shine of St.Mura is in the Wallace Collection, London, and the baptismal font is since Penal Days, in Lag Church, Malin.

St. Mura’s Cross-slab, said to mark the burial place of the saint, dates from the eighth century, it stands to the SE of the Church. On both faces is carved a Greek cross and on the edge of the slab is inscribed in Greek characters “Glory to the Father, the Son and Holy Spirit”.

A carved wheel cross is built into the wall by the entrance gate and on the opposite side is a large stone with a hole in it possibly a message box. There is a local superstition that if you put your clenched hand inside and make a wish then your wish will come true.

Near St. Mura’s Cross some ancient slabs mark the graves of early clergy. There are a number of graves of general interest.

Lough Swilly was for many years a base for the British fleet and several sailors are buried here. Another grave is that of Major Sampson, an ancestor or William Sampson, the United Irishman and friend of Wolfe Tone. The two families were connected by marriage.

Agnes Jones lived in Fahan House and trained under Florance Nightingale. She did much to improve and modernise hospital administration.

A tablet nourishes and composes in memory
This companion to the Lady of the Lamp;

“They should be resting in a place of lichen and fern,
In a garden of herb-beds, rosemary and thyme,
Where modest gardeners, tilling and sowing and reaping,
Husband all the quickening, reigning things about them.”
– (Florence and Friend)

Of all the many inlets of the sea that break into the much indented shore of this island, Lough Swilly is among the most impressive.

While this Lough has provided sheltered sailing for Yacht Club members since Lough Swilly Yacht Club was founded in 1955,as a waterway it has a colourful place in Irish Maritime history.

September 1607 saw the passing of Gaelic Ireland with the Flight of the Earls from the Rathmullan area following the failure of the Irish Rebellion of 1595.

In the Autumn of 1798 a small French fleet under Admiral Bompart was intercepted off Tory Island by a larger British force. Following a running battle in heavy seas the French frigate La Hoche was forced to surrender and was escorted into the Swilly by HMS Doris. On board was Theobald Wolf Tone, the leader of the United Irishmen who was arrested and subsequently hanged for treason in Dublin.

This penetration of the French fleet as far as the North West Coast prompted the British to fortify the Swilly immediately. Lough Swilly had long been earmarked as a centre likely to be important to both naval and military authorities.

Between 1798 and 1800 forts were built at opposite sides of the Channel-on the East Bank at Dunree, Ard’s Point, Salpan Hill outside Buncrana, Inch Island, on the West at Macamish Point, and Knockalla. Knockalla and Dunree were the main forts being closest to the mouth of the Lough and at it’s narrowest point.

In 1884 the Lough Swilly fortification scheme was drawn up and with improvements in naval gunnery only the main east bank forts were required with the addition of another fort at Leenan Head.

By the beginning of World War 1 in 1914 massive fortifications with gun emplacements had been built at both Leenan and Dunree.The remains of the gun emplacements at Leenan are well worth a visit and are within easy walking distance of the pier at Leenan. They give a spectacular view of the mouth of the Swilly looking across to Fanad Head.

1914 saw the Swilly being used as an anchorage for the North Atlantic Fleet of the Royal Navy and for some time over forty ships in all lay off Rathmullan.

A temporary boom was laid between Macamish and Ned’s Point as protection against floating mines and submarines.The Liugh also became an assembly point for convoys en route to the United States. Following the loss of the battleship Audacious, sunk by a mine off Culdaff in 1915, the main fleet was moved to Scapa Flow in the Shetlands and the volume of shipping using the Lough showed a steady decline over the years.

The Swilly remained a Treaty port after 1922 with a British garrison at Dunree, an indication of it’s importance in British defence strategy.

The handing over of the Swilly Forts on 3rd of Oct, 1938 saw the end of an era in Lough Swilly. Apart from the much plundered Shell Tanker fleet of the sixties, the East European factory ships in the last 10 years and the rare presence of an Irish Naval vessel at Rathmullan, the Swilly has seen little major shipping traffic until the visit of the dredger Mary Angus to the Lough in August 1993.

The oldest of the three Lighthouses in lough swilly is at Fanad Head on the western shore. It stands at such a strategic point facing the open North Atlantic and also lighting the entrance to the Lough that it is in fact a dual purpose light, both sea light and harbour light. It can be seen for fourteen miles in clear weather and was first exhibited on St. Patrick’s Day 1817.

As so often happened those days it took the wrecking of a ship and the loss of human life to bring about the building of a lighthouse at Fanad Head.

The Soldana ran aground on the treacherous rocks below the point with a total loss of life. The only survivor was the ships parrot, which wore a silver collar with the name Soldana inscribed on it.

Captain Hill of the Royal Navy, stationed in Derry wrote to the Dublin Ballast Board strongly recommending a lighthouse in Lough Swilly.

In that period traffic in and out of the Lough had greatly increased and there was pressure for at least two more lights in the area. Eventually it was decided to build lighthouses at Dunree Head and Buncrana pier. At first it was thought that one of the Martello towers at Macamish and Dunree could be converted but that was not found feasible. The lights at Buncrana and Dunree were both exhibited on the same day, Jan 15th 1876.